An introduction to IOCTLS’s and utilizing and discovering them while conducting Windows kernel exploit development.

Utilizing drivers for local privilege escalation based attacks in a very common attack technique and method used by attackers and hackers alike. Kernel-mode drivers that are susceptible to various types of buffer overflow/vulnerabilities allow for an attacker to obtain a higher level of privilege, this is known as an EOP (escalation of privileges) attack, if an attacker can abuse a kernel-mode driver to write data in kernel mode, they can supply a token-stealing shellcode payload to escalate their privileges to a position like NT\AUTHORITY SYSTEM.

Almost every driver is registered on Windows with a device name and like that allows for user-mode to obtain a handler to the kernel-mode driver. Kernel32.dll includes CreateFileA which is a function denoted by Microsofts MSDN docs as a function that allows for handler distribution from kernel-mode to allow for cross communications.

CreateFileA creates or opens a file or I/O device and returns a handler that can be used to access the various types of communication to kernel-mode in the sense of kernel-mode drivers. After obtaining a handler to the driver device, we can use the function DeviceIoControl which allows a user to send an IOCTL code to a specific device driver.

The hDevice field is filled with the device handler, which is provided by the previously used function. dwIoControlCode function is filled with a discovered IOCTL code address (which looks likes 0x0022001c). The IOCTL is used as a request by a user-mode program to call to a kernel-mode action (a syscall).

Bits 0-1 are defined as TransferType. This definition is used to work as the method of communication when transferring data to a kernel-mode driver. Indicating how the system will pass data to the caller of DeviceIoControl

These I/O control codes are contained in IRP_MJ_DEVICE_CONTROL and IRP_MJ_INTERNAL_DEVICE_CONTROL requests. The I/O manager creates these requests as a result of calls to DeviceIoControl 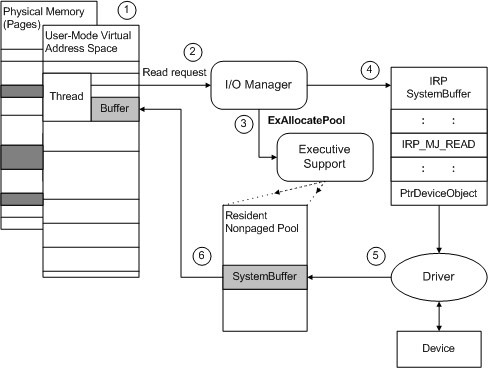 Bits 2-12 are defined as FunctionCode, this definition is used to determine the user-defined vs. system-defined IOCTLs.

Bit 13 is defined as a Custom and like bit 31 it’s defined for representing user-defined values.

Bits 14-15 are defined as RequiredAcess bits, the various types of access a IOCTL can provide is:

This is how the I/O manager can reject IOCTL requests if they are not opened with the correct amount of access.

Bits 16-30 are defined as DeviceType bits, and this is representing the device type that the IOCTLs are written for. And the last bit, bit 31 represents user-defined values. A full list of device types can be found at https://docs.microsoft.com/en-us/windows-hardware/drivers/kernel/specifying-device-types

For defining IOCTLs, there is a system-supplied macro CTL_CODE which is defined in Wdm.h and Ntddk.h

For example, within the HEVD vulnerable driver, there is the CTL_CODE IOCTL macro defined as:

for the Write What Where vulnerabilities IOCTL. This can be be used to calculate the IOCTL via Python command line magic.

Capturing IRP packets and requests which include IOCTLs is possible through system monitoring. Various tools can be utilized to do this.

IrpTracker is a tool which allows sniffing Ring3 and Ring0 traffic for communications between user-mode and kernel-mode drivers. This can be used to track IRP requests and IOCTLs which have been used to communicate with a driver.

IOCTLbf is a tool designed for basic kernel driver fuzzing via a provided IOCTL, but once you have a valid IOCTL, you can use IOCTLbf to fuzz for more.

kDriver-Fuzzer is based on IOCTLbf, and it allows for more kernel driver fuzzing and IOCTL bruteforcing/discovery.

We can fully automated IOCTL discovery with the win_driver_plugin from FSecureLABS and the help of Sam Bowne. This plugin automates the discovery of the DispatchDeviceControl function / dispatch functions which we can use to obtain many IOCTLs from the driver.

OSR Online IOCTL Decoder is built-in JS and is an online IOCTL decoder that allows you to easily find all of the details about the various IOCTL values as discussed earlier.